One of the most elucidating moments that I experienced while working in hospitals was when I was asked to help a teenage boy paint a picture; a landscape where the sea meets the sky.  Though he was not able to use his hands, his desire to participate, to create, was so strong that he took a brush in his mouth and followed the instructions being given to the other patients in the clinic.  And I was lucky enough to hold the canvas. 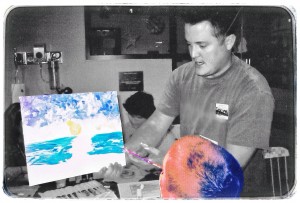 I had a strong desire to steer the brush, to guide the canvas so that he was “successful” in creating the image of a beach, the sun and the sky.  But I realized that my vision was not as important as encouraging his effort.  My idea of brush strokes had no relevance while he was creating.  I imagined the picture on the wall of his room.  Would it be an image of how I helped him or a record of his effort, his courage, his strength?